Posted by Ignatius on Thursday, April 28, 2011 Under: Performance products

The latest craze has swept the sport world and it promises more balance, energy, strength, speed, power and flexibility. And the best thing of all it is easy to use and non invasive!

And just looking at tlibre of persons using this “technology” it has to work!

Upon looking at the supposed technology in the bands I discovered that each manufacturer of these products all have installed a hologram in the band that is clearly visible. When I asked my clients / athletes if they know what a hologram is they couldn’t really give me an explanation of other that it is this cool looking sticker in the piece of “performance jewellery” they are wearing. So I asked one of the guys that sell the bands and he told me that it is the technology they are using to mathematically encode over 100 algorithms in this band that changes and balances the body’s meridian points by the exchange of the information / vibration inside the hologram that is in the band. I thought WOW! This must be awesome technology that is used, no wonder it costs between R300 – R600 for varying brands.

Until my brain kicked in and I realized that Holograms need a laser beam to be opened or for the information to be accessed and so went and found a very easy and accurate explanation of what a hologram is by Michael Talbots Article on University of London physicist David Bohm’s work.

A hologram is a 3-dimensional photograph made with the aid of a laser. To make a hologram, the object to be photographed is first bathed in the light of a laser beam. Then a second laser beam is bounced off the reflected light of the first and the resulting interference pattern (the area where the 2 laser beams commingle) is captured on film. When the film is developed, it looks like a meaningless swirl of light and dark lines. But as soon as the developed film is illuminated by another laser beam, a 3-dimensional image of the original object appears.

The 3-dimensionality of such images is not the only remarkable characteristic of holograms. If a hologram of a rose is cut in half and then illuminated by a laser, each half will still be found to contain the entire image of the rose. 2

Indeed, even if the halves are divided again, each snippet of film will always be found to contain a smaller-but-intact version of the original image. Unlike normal photographs, every part of a hologram contains all the information possessed by the whole.

Upon further investigation I discovered that holograms because of their nature are extremely efficient at storing large quantities of information in very small spaces but unfortunately very expensive to produce, hence most information is still stored on CD’s DVD’s and various devices. I also discovered that one also gets a holographic print, which is what you may find as a logo on your credit card or some fancy stickers. These so called holograms do not have the capacity to store information and is only a graphic design print purely for aesthetic / design purposes. They are usually printed on nickel paper which is the paper that they make those silver party balloons out of.

So in other words to extract information from a hologram you will need to shoot a laser beam through it and it would need to have been programmed with a very expensive process and also with material that could withstand the laser and store the information. So in lay mans terms something to the likes of a DVD or CD player just more advanced.

So when I “reverse engineered” one of the bands that broke during rigorous physical activity, I discovered that the hologram was a piece of silver paper almost like a sticker, also after speaking to some people using the band the one person showed me how their hologram actually curled up inside the band. So now I discovered that it is likely that the hologram in the band is likely to be a designed print and not an actual hologram.

But just for fun, let’s say it was a hologram. How will the human body be able to extract the information within this hologram? Had we as humans evolved to have lasers shooting from our skin through a hologram that comes in close vicinity of it? Is my body a holographic reader? I doubt it.

But why do these bands seem to work? Recently there was a short piece on ESPN’s program “Outside the line”, that asked some hard questions in this regard and had interviews with some PhD type dudes at The University of Wisconsin at La Crosse ( The video clip is available at http://theperplexedobserver.blogspot.com/2010/11/power-balance-bracelet-gets-pawned-by.html )

They conducted a double blind study on the performance enhancing effects of these bands for the American council on exercise which is a consumer watch dog in the USA. They used the same testing that is used by the manufacturers and sales people of the bands. And in the words of Dr John Porcari “Based on what we saw it doesn’t work.” They found that the test subjects did statistically better every time on the second attempt of the test no matter if they were wearing the real band or the placebo band.

There is no question that there are a lot of people out there that have found pain relief and various improvements in performance by wearing the bands. A lot of sales people out there are doing tests on a daily basis and it works when they do the tests, but remember the sales person is one of the variables in the equation of the test, and it is easy to push just a little bit lighter when the person is wearing the band, whether they are doing it on purpose or not. 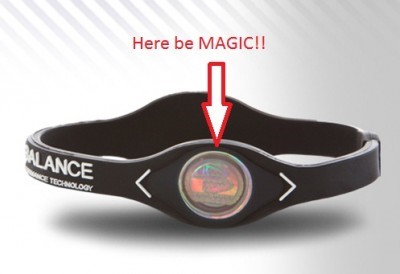 *There was a study done where they used patients coming for knee surgery and they took then through the complete process of arthroscopic knee surgery except the actual process and the patients all had massive improvements and felt that the operation was great success. See the article at this link: http://www.nytimes.com/library/magazine/home/20000109mag-talbot7.html

Tags: powerbalance
« Back to posts